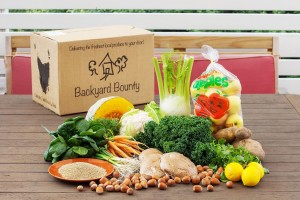 This week’s box takes on a distinctly southern flavour, something that unfortunately was involuntary due to the terrible flooding of northern Tasmanian growing areas. We’ve heard that Forest Hill have come through it ok, and hope to have more good news from other growers in the near future.

A couple of chance connections provided some excellent produce for your boxes this week: a fundraiser at Mrs BB’s school led to a connection being made with the father of two students who had been growing pumpkins for his two hotel-restaurants at his Safety Cove farm (at which he also raises some very tasty beef!), and had been doing so well that he’d ended up with way more than he could use! Martin’s Jarrahdale pumpkins (some of which weighed in at over 10 kgs!) feature this week, and we’re looking forward to also including some of his QLD blue pumpkins in future weeks.

An unexpected knock at the door last week came from a stranger offering a box full of garlic he’d grown at his Molesworth property, which we gladly bought on the spot as we’d just run out of our own stocks – unfortunately the piece of paper I wrote his name down on has since disappeared, but I think his name was Steve. We’ve also got some lovely home-grown Meyer lemons from Sandra in Moonah. 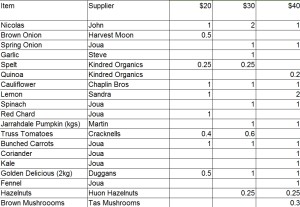