Simmer one ham hock slowly in a slow-cooker crock full of water for a day – I had a chicken carcass in with it for extra flavour, you could also just cook your ham hock in ready-made or home-made chicken stock. 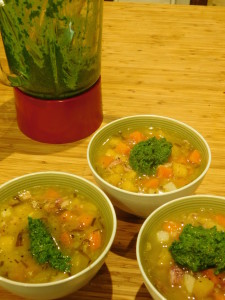 At the end of the ham cooking time, dice veg in roughly 1cm cubes – I used a very large swede, a small-ish kennebec (both peeled) and a few large carrots, and finely dice an onion. Add all to a cast-iron pot with some oil, and cook over medium-high heat to sweat some of the rawness out of the onions. Add four cloves of chopped garlic, and herbs of your choice (I used some fresh winter-savoury, and some sage and tarragon that had been drying hanging at the kitchen window.) Continue to cook to take the edge off the garlic, then strain the contents of the crock-pot into the mirepoix (chopped veg) and boil with the lid on until the veg are soft.

Meanwhile, remove any tough stems from the kale (the easiest way is to grab the kale from the stem end and run your hand down the stem, gripping to take any leaves with you as you go.) Put into a blender with plenty of olive oil (around a quarter cup) and the juice of a lemon, plus a good pinch of salt, and blend to a puree. (This can be easier said than done… ) Add two cloves of garlic, and about 8 walnuts, and blitz until roughly pureed but still with some chunk. Season to taste.

Season soup to taste and serve with a dollop of the pistou.