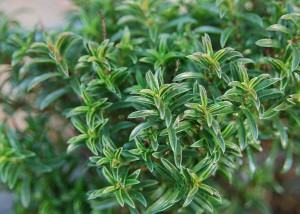 When we started the preserving end of our business around four years ago, we sourced all our produce from home-growers, and we still love to do so where we can, for both preserves and vegie boxes. To encourage latent green-thumbs out there, we’ve started a tradition of punctuating the seasons with the inclusion of potted herbs from Herb & Co – each season’s herb is suitable for planting at the time of its inclusion. The winter-savoury included in this week’s box is similar in flavour to thyme that loses some of its pungency when cooked for long periods. It’s a hardy plant that enjoys a sunny spot and well-draining soil. Happy planting!

In addition to being a feijoa magnate, John from Kindred Feijoas is a keen gardener in his own right – this week’s $20 boxes include John’s Jerusalem Artichokes (meaning that all box sizes have now had a taste of this unusual but definitely under-rated delicacy! We’ve also sourced some delicious watercress for or $40 customers this week from regular contributor Richmond Farm, and this week’s box features the last of Tassie Pride‘s capsicums – the workforce at their 3 hectare glasshouse will now swell significantly as they begin the process of pulling out the tired old plants and planting out the new established seedlings; the Cracknell’s at Granton will be following suit in a few weeks time with their tomatoes.

Here’s the full break-down of this week’s box: 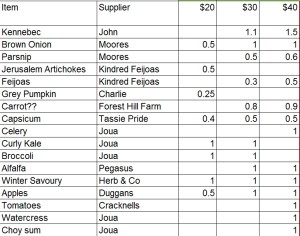