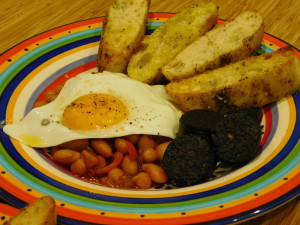 Saute eschallion and capsicum in olive oil in a heavy based pan over high heat; when soft, add the spices and cook out, then add the tomatoes and garlic and use the liquid that renders out of the tomato to deglaze the spices from the pan. Add two tins of beans of your choice (I used one of butter beans and one of chick peas), along with the liquid from one tin. (The liquid from tinned or cooked beans is called “aquafaba” – literally bean water – and is a natural thickening agent and can also be used as an egg substitute.) Cook over high heat til the beans threaten to fall apart, then add about 3 tbsp of pomegranate molasses, lower the heat, and continue to cook until it reaches the desired consistency.