We unfortunately need to begin this post with an apology… in the two and a half years we’ve been doing our all-Tasmanian vegie boxes, we’ve often had close-calls which have required last-minute (sometimes very last-minute) replacements for items that we’ve ordered from growers that for one reason or another have not arrived, been short on the numbers required, and occasionally items that haven’t met quality standards. However, the rhubarb that was scheduled to arrive this morning at the Brighton Freight Depot was not there to be collected, and as a result we had no choice but to send boxes out with an item missing! The culprit for this mishap was stormy weather in the north-west area – great for filing the dams, but it also wreaked havoc with the local power infrastructure, which led to a few of our growers being un-contactable by normal means; and it also resulted in a computer glitch at Premium Fresh that meant our rhubarb, already delayed by the aforementioned power issues, wasn’t packed for delivery. All delivery customers should have now received an email regarding this issue, and will have a credit of $2.5 placed against their May accounts – please see the email for more details. We were able to make other arrangements for pick-up customers, however, as we had a few hours longer to get this organised! 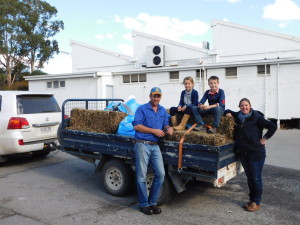 There was, however, another item that was ready for collection at the Brighton SRT depot this morning, which was four boxes of eggs from a new supplier – Olson’s eggs, in Karoola. Olson’s actually stock at a slightly lower density than Golden Free Range, so we’re happy to be able to provide these as an alternative to the Pure Foods eggs that we’ve been using as a back-up plan until recently.

We’re also excited to include pumpkin from Charlie, our youngest grower ever (I think…) Charlie (pictured atop the trailer, left) is 9, and has presided over a very productive pumpkin patch this year! We received delivery of half a trailer load of these last weekend (Charlie, along with his sister, Mum and Dad, drove down from Cressy especially to deliver the pumpkins to our warehouse) and we’ll be including both the butternuts and sweet greys in upcoming boxes as well.

Here’s a full list of what’s in (or in the case of the rhubarb, supposed to be in!) this week’s box. 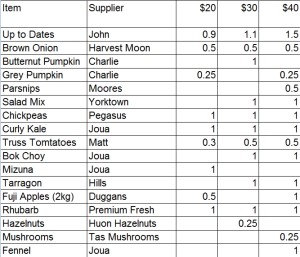