When one of our customers offered us a big box of cherry plums from her tree a few months ago, we thought it might be nice to make a big batch of jam in small jars to have as an additional fruit option for boxes – and when our plan A to include raspberries in this week’s box was met with the news that the season has just finished, along with the numbers adding up just right, it seemed fate had decided for us! All $40 boxes have a jar of Marylouise’s plum jam – we don’t always get the chance to include home-grown produce but it’s always a treat when we can! 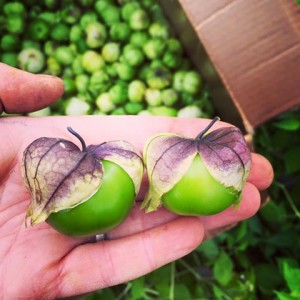 As a special treat, the $40 boxes this week also include a handful of beautiful tomatillos from Provenance Growers, as pictured to the left in the hand of the actual grower! This unusual fruit is similar to a green tomato in flavour, although the texture is quite different and it is only loosely related. It’s a highly prized ingredient in South American cooking, and we’ll try to post some recipes to get you started on cooking these.

This week’s box also includes items from two big producers we visited on our travels last week. The carrots, turnip and onions in this week’s boxes come from Premium Fresh, who are one of the largest vegetable growers in Tasmania, employing over 200 people in the north west of Tasmania during peak season. The capsicum and cucumber are from another grower that we’ve been buying from regularly for well over a year: Tassie Pride. Johann (pictured below with wife and business partner Mariette) and family started their hydroponic hothouse just outside of Devonport when Johann was working as a counselor in 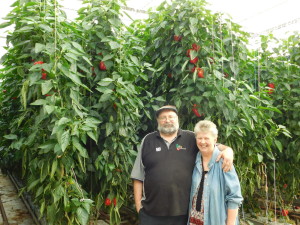 the region; seeing many cases of depression and suicide due to poor employment prospects at the time, he decided to do something about contributing to the solution. The Tassie Pride glasshouse now employs around 30 locals in picking and plant maintenance, and as the second largest hydroponic capsicum grower in Australia, produces around 800 tonnes of capsicum every year.

Agriculture is a huge part of the economy in the North West of Tasmania as the naturally nutrient rich red basalt soils provide excellent growing conditions for vegetables – as opposed to the soils down south which tend to be much poorer and require the addition of more nutrients and fertilisers – which is why the south tends to have more fruit growers, along with smaller scale niche growers who are able to invest time into developing soil using targeted organic methods.

Here’s the full breakdown on what’s in this week’s box: 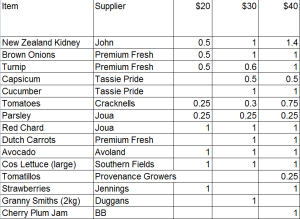