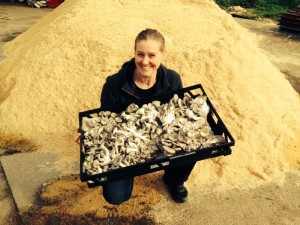 This week’s box has a special treat for everyone; a punnet of beautiful mixed Asian mushrooms from the Cygnet Mushroom Farm. Cygnet local Bec Lovell started the operation in an old apple shed when Huon Valley Mushrooms closed two years ago after a number of changes of ownership, and has established quite a following for growing gourmet varieties instead of the more common commercial white mushrooms. If that’s not enough, Bec runs Cygnet Garden Larder, a proper old-fashioned local grocer in Cygnet selling almost entirely local produce, much of it sourced from the Cygnet region, and even a range of house-brand preserves! While Cygnet is unlikely to ever quite return to the halcyon days of the peak apple and fruit growing and processing time of the first half of the twentieth century, with the support and hard work of people like Bec this area is beginning to find a new footing as a tourist destination and thriving local community.

It’s also a week of endings and beginnings: we’re sad to see the last of this season’s corn from Elphin Grove, but excited (well I am at least!) to see the return of my favourite vegetable, the much maligned Brussels sprout! I’m sure many of you have horror stories of childhood experiences with this most delicious vegetable named after its considerable popularity in Belgium, but lightly steamed so that it’s soft but not mushy, or even better roasted or fried, it’s a thing of sublime beauty! If you needed even more reason not to overcook this king of vegetables, they contain a phytochemical known as sulforaphane which preliminary research has shown to have anticancer properties – but boiling largely removes this. Better yet, just eat them raw like I do!

(By the way, if you’ve ever wondered what they look like, the picture on the left shows how they grow on stalks – they’re actually an edible bud of a plant in the brassica family).

The sprouts, shallots, rhubarb and Chantenay carrots all come from Premium Fresh, Forth, who we’re looking forward to visiting early next week!

Here’s the full break-down of what’s in the box this week: 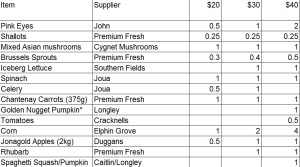 *Please note that the Golden Nugget pumpkin is only included in boxes that have the Spaghetti Squash, as these are smaller than the pumpkin in boxes without the spaghetti squash.