To make the fritters: 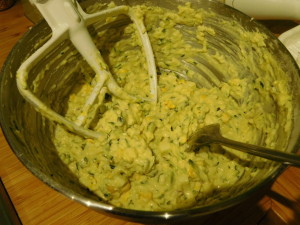 Grate two zucchini and a small red onion onto a teatowel. Wrap up, and wring out as much liquid as you can (otherwise this will be released in cooking and attempt to erode your fritters from the inside out). Move to the bowl of a stand mixer with some diced haloumi, a good handful of frozen corn (we’ve been amassing a collection in the freezer by stripping the extra corn from Elphin Grove into clip-lock bags), and a pinch of salt. Using the standard mixer attachment on lowest setting, first add about half a cup of maize flour (the yellow kind, not cornflour), then about half a cup of self-raising flour. Add a good slosh of milk, beat until well combined, then add more of each flour until it’s firm enough to sit up in a pan, but still loose and sticky (see picture). Spoon into a hot 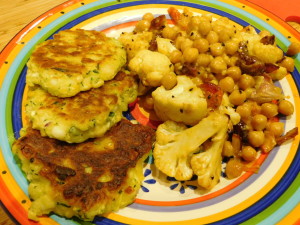 lightly oiled pan, and allow to sear well on the bottom side before flipping and squishing. (To get a nice golden-brown finish, you’ll need to maintain a reasonable amount of oil in the pan, even with a non-stick pan.)

To make the salad:

Toss the separated and halved/quartered florets of half a cauliflower and a handful of halved cherry tomatoes with olive oil, a couple of smashed cloves of garlic (remove the skin if you wish), and about a half tsp of nigella seeds, along with a pinch of salt. Roast until the tomatoes break down and the cauliflower browns a little, then add a tin of drained chickpeas and continue to cook til any residual moisture is gone and any liquid is well thickened. Meanwhile, combine the juice of a lemon with an equal amount of olive oil and about a tsp of tahini, and combine well, making sure to mix out any lumps of tahini (it should be a fairly smooth emulsion.) When finished cooking, remove from oven, pour over dressing, add a few chopped dates, and toss well to combine. Rest until warm-hot before serving.