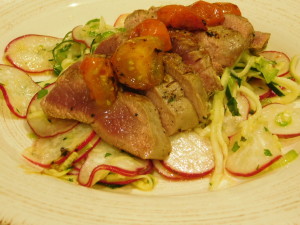 Using a v-slicer or equivalent, thinly slice radishes cross-wise, then julienne a zucchini lengthways. Thinly slice a spring onion, combine with other ingredients and toss with a pinch of salt. Chop mint leaves, a chilli, and a clove of garlic together on a chopping board to mince and combine, then mix a few tbsp each of olive oil and lemon juice, plus salt to taste. Dress salad and allow flavours to combine (just long enough to cook the wallaby fillet!)

Season the wallaby fillet and a handful of halved cherry tomatoes well, drizzle over some olive oil, then put both in a very hot skillet, keeping them in separate parts of the pan. Cook the fillets til rare-medium-rare, flipping once, and rest. Meanwhile, move the tomatoes as little as possible to avoid breaking them up, allowing them to get some good char.

Slice the fillet after resting, arrange on top of the salad, and then the charred tomatoes on top of that.