This week’s box sees our first ever inclusion of Tassie figs – we’re lucky enough to have a loaded fig tree but it’s never been enough to share with customers, as they ripen sporadically over time rather than all at once; Dulcot grower Peter has a orchard of over 1000 trees, however, so has been able to supply us with the 600+ figs we’ve needed to give everyone a taste of this sweet delicacy with a rich cultural history, that’s actually (believe it or not) related to the mulberry! 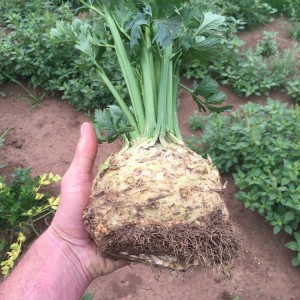 On the subject of lesser-known culinary delights, this week’s box also sees the return of Elphin Grove‘s celeriac, which is a variety of celery that’s cultivated not for the stem but the edible root. If you’re new to this vegetable, it’s got two quite separate characters – if you eat it raw (e.g. shredded and dressed in remoulade) it retains the bright flavour and crispness of celery without the stringy fibres; but roast it and it develops a special rich earthy flavour all of its own, perfect for using as a key ingredient in soups and purees. It might look a little rough around the edges, but slice off the gnarly outer layer and you’ll find a pure-white centre! 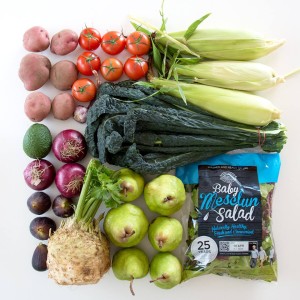 We’re also lucky enough to have sourced some home-grown passionfruit for our $20 boxes this week, along with the last of Marcus’s delicious field tomatoes for $20s and $40s. Matt’s has let us know that the warm weather has accelerated the maturing of their corn, so the season will be finishing earlier than expected – if you’ve got corn in your box, you might like to strip and freeze the kernels in clip-lock bags for a hit of summer when the warm days have well and truly finished. Avocados will probably only have another month or so too – but we’ve got the two of the three key ingredients for a guacamole (avocado, red onion, lime) all ready to go! 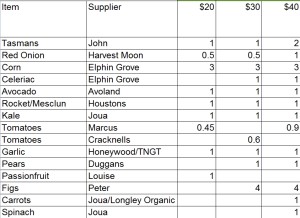