The treatment of the pork belly in this recipe takes a fair bit of time, both cooking and resting, so be prepared! The first phase in cooking the pork belly is really about getting flavour into the meat and tenderising, the second phase about getting crispy skin, and the third is just reheating (you could also just serve the twice-cooked pork on top of the stir-fry).

In a roasting pan combine about a cup of home-made chicken stock with about half a cup of soy, half a cup Chinese cooking wine and about two cups of water. (If using bought chicken stock you may need to back off on the soy a bit due to the extra salt, or you may also prefer to just use water instead of stock.) Add a good spoonful of honey, a few star anise, a cinnamon stick and some grated ginger (no need to peel as the solids will be discarded). Mix well, taste (it shouldn’t be too salty but you should be able to taste the sweetness of the honey), then place the pork belly skin-side up in the pan, making sure not to get any of the marinade on the skin (this will inhibit crisping later, and the honey will also burn.) Cook at between 100-120C for two or three hours.

Remove the pork from the liquid, and allow to cool and drain. (The liquid will be very tasty – I’ve kept mine, with the addition of some extra chicken stock, and plan to use it as the basis for a future soup.) Score the belly (see above), rub with salt and chilli powder, then place on a rack in a clean roasting pan (either the same one washed or a fresh one – the residual liquid will burn and be quite difficult to clean) and put under a very hot grill (250c) until blistering and crisp (see below!). Rest for at least ten minutes. 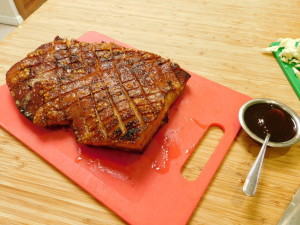 Meanwhile, shred a quarter of a cabbage; cut a small-medium onion into wedges; slice baby corn on the bias (or strip a cob of corn if baby corn not available); finely chop three cloves of garlic; and thinly slice a red chilli and a red capsicum (or just lots of red chillies if you’re the authentic type!) Mix together a couple of tbsps of oyster sauce, and a tsp each of sesame oil, sesame seeds and lime juice. 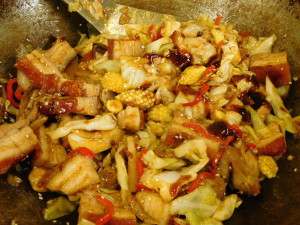 Cut the rested pork into bite-sized pieces. To a hot wok with a slosh of rice-bran oil add all the vegetables (but not the garlic) and stir-fry until the cabbage is wilted and soft but still has some bite. Add the garlic, and as many szechuan peppercorns as you can handle, and cook for a further minute or so, then add the sliced pork belly. Heat through, then add the sauce mixture and cook for another minute or so until the pork is well coated
and the sauce is glossy. A dish in itself with an enormous piece of belly like this one, but could be augmented with rice if using a smaller piece.