Getting to know as many farmers as we have over the past two years of doing what we do, one of the messages we’d love to get across is that not only is growing food hard work both physically and intellectually, but it also requires substantial levels of risk; fruit & veg are living things, and often have a mind of their own, and when you throw climate and the consumer market in as variables it’s a wonder anyone ever makes any money out of it… 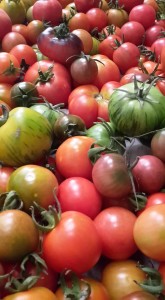 This week’s box features products from two very different businesses who have both recently faced difficulties in their business from forces outside of their control. We’re very pleased to feature Tasmanian Natural Garlic & Tomatoes in this week’s box again, this time in the form of the latter part of their name – mixed heirloom cherry tomatoes, which are almost too pretty to eat, but trust me, you’ll regret not eating them! Annette & Nevil are bouncing back from significant damage to their farm from recent rain and hail in Selbourne, and we’re looking forward to visiting them at their Tasmanian Garlic & Tomato festival on the 20th March (more details to come).

From a totally different angle, the recent health scares over lettuce from a particular Victorian producer have led to large-scale local salad producer Houstons seeing a massive down-turn in sales of their completely unaffected products. Creating big farming operations requires huge investment, and once again, risk; Houstons employ around 300 local people, and feed thousands. We’ve done our bit by buying almost 200 bags of their baby mesclun this week!

If you’re wondering why your box is so heavy this week, the Duggan’s juicy new-seasons Gravensteins are ready for you to enjoy, and we’ve also got delicious fresh and sweet new-season cabbage from Harvest Moon. If you’re one of the lucky people who’s got a whole cabbage (mainly $40 boxes) you might like to try your hand at kraut – we’ve also included Forest Hill Farm’s baby onions if you’d like to really get your pickle on! We’ve even got some of the biggest raspberries you’ve ever seen from new local grower Tasmanian Berries and Cherries, who are hoping to be able to be producing raspberries well into winter with their weather-protected tunnel growing system!  Plus loads more, details below: 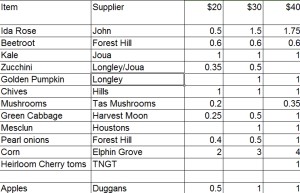