This recipe consists of two separate elements that combine to make a layered soup – either could be served independently of the other, but the combination of a chowder-style soup with mustard and ham works well.

For the chowder, simply dice a couple of large potatoes (peeled) and boil in about a litre of stock (I used a home-made chicken stock enriched with celery and carrot, but any chicken or veg stock would do). If you like a smooth consistency, cook the potatoes first, then blend, then add a couple of cobs worth of corn. If you like a chunkier texture, add the corn at the same time as the potato, then use a masher to break the potato up when it’s cooked. Add some cream and cook briefly to finish, season to taste. 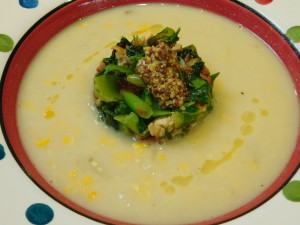 Whilst the soup is cooking, cut some speck into lardons (any bacon would be good, but a thicker cut gives a more satisfying texture), and slice a bunch of washed mustard greens, including the stems. Cook the speck and stems of the mustard greens on high heat until the speck starts to brown and become crisp. (I also added some shredded chicken meat from the frame I used for the stock at the same time, to soak up the fat that rendered out of the speck). Add the shredded leafy parts of the mustard greens, cook til wilted, then deglaze the pan with a little bit of water still over the heat so you don’t miss any of the tasty bits cooked onto the pan.