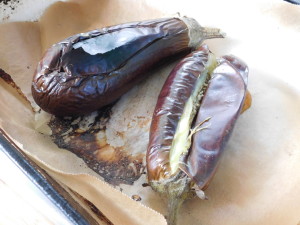 Baba ghanoush is a close relative of hummus, the ever popular middle-eastern dip made with chickpeas and tahini; in fact, it’s pretty much the same thing with eggplant substituted for chickpeas, although as with most classic dishes there are variations in both. The main trick with baba ghanoush is the preparation of the eggplant, which should be cooked whole at high heat until the skin blisters and burns, giving a smoky flavour and silky smooth interior that is essentially steamed in its own skin. Some recipes call for doing this over a gas hob, but as eggplant is inclined to leak sticky fluid as it bursts, this is a bit messy, and doing it in a very hot oven is a lot easier (pictured left). 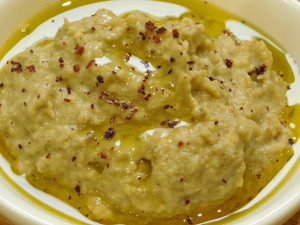 After peeling the two cooked eggplant, put it in a food processor with the juice of a lemon, a couple of garlic cloves (raw, or roasted if you prefer a milder garlic flavour), salt and a good tbsp of tahini (sesame oil will give a similar flavour if you don’t have this). Add a little olive oil and you have a basic baba ghanoush – add spices, or fresh herbs, if you want to embellish further. (The pictured version is sprinkled with a little sumac, a sour tasting middle-eastern spice).