I was so excited to have David Jennings’ strawberries back in the boxes this week I took an extra punnet out on the road with me to munch during deliveries… it’s been a difficult summer for a lot of growers, and David’s plants (you’ll see them stretching off into the sunset on the right when you drive into Cygnet) unfortunately got cooked in the baking sun, so they’ve only just started producing again after a fairly brutal trim. We’ll definitely be making the most of them now that the plants are back in action! This week’s box also includes another round of the Bidwell’s avocadoes, which we intend to include frequently while they’re still in season, so don’t forget to let us know if you can’t or prefer not to eat them. We’re also looking forward to being able to include more from Forest Hill (one of Tasmania’s few large-scale certified organic growers) as we transition into autumn and beets, onions and pumpkins come back online. This week’s fruit supplement is Westerway Raspberry Farm’s delicious cultivated blackberries, which are now finished for the season – a friend who lives in the area dropped these off for us freshly picked this morning in exchange for some extras from this week’s box. Sweet barter. 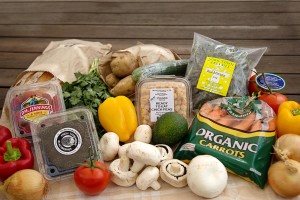 Next week should see the return of Elphin Grove’s delicious sweet-corn (all being well) and we’re also excited to try some of the other varieties they’re growing this season, including baby corn (which I’ve only ever seen in plastic at the supermarket, not in husks!); apparently baby corn may be small, but the plants are taller than Matt! We’re also anticipating the first of the Duggans’ gravensteins next week or shortly after – apples keep remarkably well but there’s nothing quite like a new-season apple.

Here’s the breakdown of what’s in this week’s boxes: 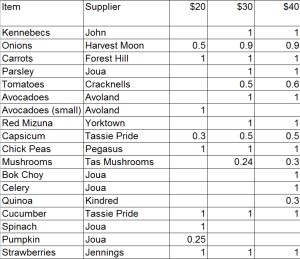