Kung Pao chicken is believed to have originated in the 19th Century in the Sichuan province of China, named after an official in the Qing dynasty; but like most great dishes, especially well-traveled ones, there are many different versions of and opinions about what it should contain. This recipe makes use of ingredients that were available to me as I made it, but in keeping with the spirit of the dish, which to me is the combination of succulent, velveted (more on this later) chicken in a sweet soy-based sauce, combined with the zing of chilli (essential to most Sichuan dishes, usually provided by copious quantities of dried red chillies in this instance) and the rich crunch of peanuts. The details around the edges are very much negotiable!

Cut about 300-500g chicken into cubes (not strips as is common in stir-fries) – I used thigh fillets which work particularly well. Combine in a clip lock bag with a few tbsp each of honey, light soy, and Chinese cooking wine, along with a tbsp of potato starch (or cornflour). (Carefully make sure the starch and honey combine well with the other ingredients.) Marinade for at least an hour. Meanwhile, cut an onion and one or two small capsicum into wedges, and finely chop some garlic and ginger. Peel the leaves off two or three heads of bok choy, wash any dirt from the bottom of the stems, and then finely slice the stem cross-ways (this avoids the stringiness of the long fibres that go the other way) and coarsely shred the leaves. Add half a stock cube to about a half-cup of boiling water and steep – or use home-made stock if you have a small amount handy.

Heat oil in a wok with dried red chillies (I only used two to give some flavour to the oil, then added heat later with sriracha sauce, as I always find the whole chillies add a lovely flavour but leave you with the dilemma of whether to eat them and suffer the consequences, or not eat them and feel guilty for wasting them), and heat until the aroma of the chillies wafts up, but be careful not to burn them! Remove the chicken from its marinade (tip the excess marinade into the cup with the stock) and then add to the hot oil in the wok. Although it may be tempting – DON’T stir.
Leave the chicken to briefly sear for 20-30 seconds, then scrape and toss, then leave again. Repeat a few times (this process isn’t cooking the chicken, it’s creating the right texture on the outside), then add the onions and capsicum (I also added some 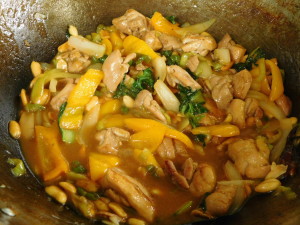 fresh green chillies at this point) and stir-fry as normal until they begin to soften. Add the peanuts, bok choy stems, garlic and ginger, and continue to toss until just cooked, add the leaves to wilt for about 30 seconds, then pour in the chicken stock/marinade mixture, in two batches,
allowing the potato starch to thicken the first batch slightly before adding the second batch. (If you’re adding hot sauce, here’s a good place to do it). Cook until the sauce is thickened and the chicken is cooked but not dry (about 5 minutes or less), adding extra honey and/or soy to taste, then if you have it, add about a tbsp of black vinegar (any good vinegar will do – this lightens up the sweetness with some acidity.) Serve with plenty of white rice to soak up the delicious sauce!