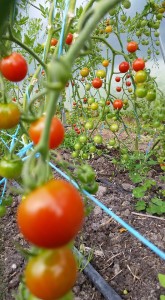 The produce in this week’s box is sourced entirely from southern Tasmanian growers, large and small. Our potato grower John has provided some super-sweet and juicy rare purple-gage plums from the garden he keeps near the house that has “one of everything”. It’s also the season for zucchini – not a long season in Tasmania, which is possibly why it’s a crop that’s largely cultivated by small-medium growers. In order to get enough zucchini for this week’s boxes (120kg!) we needed to buy from four separate local growers – Poppysmic Produce, our regular Richmond Farm, Eatem Organics (whose cherry tomatoes were also included and can be seen in action in the photo on the right!) and Longley Organic Farm. Longley have also provided us with beautiful golden-nugget pumpkin, and there’s plenty more to come; we’re also crossing our fingers for their autumn raspberry crop! 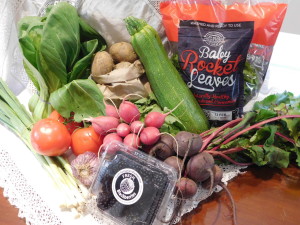 On the larger scale, we’ve included Houston Farm‘s rocket for the first time – Houston’s are possibly the biggest single producer of salad greens in the state (and are in no way connected with the Victorian salad growers in the news today…). We’ve also included tomatoes from the Cracknell family – their heated glasshouse operation in Granton produces tomatoes for about two thirds of the year, and picking up the tomatoes this week surrounded by several pallets containing literally tonnes of tomatoes certainly illustrated the size of their operation! We’re looking forward to doing a profile of their farm in the near future – they’ve also just started saucing tomatoes for the season, so if you’d like to get hold of these please let us know.

Other producers who provided produce for this week’s box include Canes Fruit (Franklin), Honeywood Farm and Westerway Raspberry Farm. This week’s fruit supplement is blackberries for the $20 boxes, and nectarines for the $30 and $40 boxes.

Full details about who gets what below; details for ordering future boxes here. 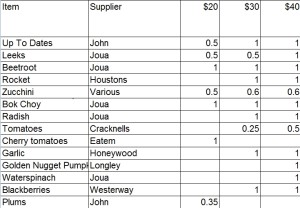