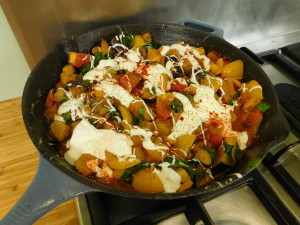 Roughly chop an eggplant, some waxy potato, and two or three small capsicums. Heat about a cm of olive oil in a heavy skillet, then fry the potato. moving frequently to avoid stickage, until slightly browned and softened. Meanwhile, finely chop a few cloves of garlic, and grind a tbsp of coriander seed with about a tsp each of rock salt, dill seed (optional), dried mint and smoked paprika. When the potato is starting to brown, add the capsicum, eggplant and garlic, and cook until the capsicum 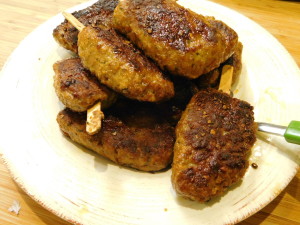 softens and the garlic is fragrant. Add the spice mix, stir over heat until the veg is well coated and the spices are glossy and separated, then deglaze with some water and add a few chopped tomatoes. Cover and cook until the potatoes are cooked, then stir through some chopped spinach, turn off the heat and cover to wilt. Top with yoghurt, more smoked paprika and dried (or fresh) dill. Serve with kofte or other grilled meats, or just by itself.