At a time of national avocado shortage, we’re excited to announce that in this week’s box we’ve got…. drum roll… Tasmanian avocados!! Whilst most avocados in Australia come from the temperate middle latitudes, they grow well in New Zealand, and a few enterprising growers are discovering that the Tasmanian climate can be quite suited to a fruit that the average Australian eats over 3 kg of every year. 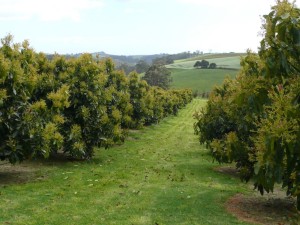 When avocado farmers Paul & Maria Bidwell moved to Tasmania from Western Australia in 2009, they decided to bring their crop with them, and their now established three-hectare orchard is bearing fruit. Aptly named “Avoland” (pictured right) is a pesticide-free operation, and the pair have even managed to give bees an acquired taste for a crop they usually don’t take much interest in, resulting in a impressive improvement in yield and subverting the usual two-year fruiting cycle of the plant.

The avocado included in your box was picked and packed on Wednesday, and should be at its best early-mid next week. 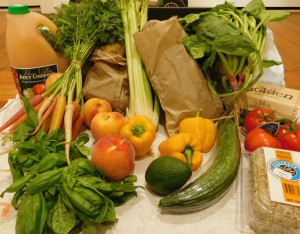 This week’s box also includes blueberries (and snow peas as substitutes for other items) from Russel, composer and gardener, whose chemical-free produce is grown in the beautiful alluvial soils of his small plot next to the creek that runs through his Geeveston property. Thanks too to box-subscriber Meg whose greengages were included in a few fruit supplements this week – unfortunately only as substitutes as we need as many of this prized fruit as we can get for Mr BB’s ever-popular roasted greengage jam.

Our thoughts go out this week to the growers in the north of the state whose crops have been affected by the freak weather and bush-fires, especially Tasmanian Natural Garlic & Tomatoes who may have lost their entire crop of tomatoes for the season – fingers crossed the plants will recover and we’ll be able to feature their beautiful many-coloured heirloom fruit in a box in the not-too-distant future.

Here’s a full break down of what’s in this week’s boxes: 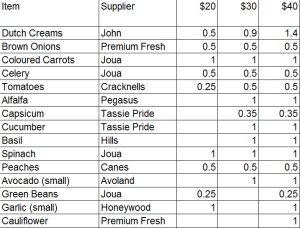